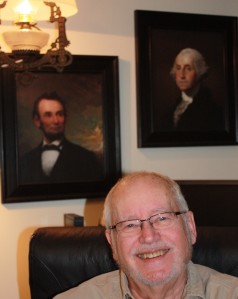 After being raised on a Minnesota farm, Ron had a successful career of 48 years in aero space and was one of the very few people who was never laid off or bumped around within or between companies as he survived over 40,000 layoffs and spent all but 11 years in one department where he progressed through 16 hourly pay grades and several salary grades. The Lord blessed him even though he was far from him for about 25 years. Ron is a sinner saved by grace. But that isn’t what is remarkable about him.

If anything might be somewhat notable about him, it is that he fell deeply in love with God’s Word and studied it as he read through the Bible many times for approximately 30 years. He learned to ponder the Bible like David did and after years of receiving remarkable insights, he began documenting Bible studies and speaking out about America’s downward path.

Ron has been a lifelong conservative and has been keenly aware of America’s political scene even as a young lad during WWII when he found himself inside a side panel of their streamed lined corn picker doing bombing runs on Germany and Japan!  He was shocked as a lot of adults were when Truman out polled Dewey in a mock election when in the fourth grade at his small country school. When he was in the eighth grade, he argued often with a bunch of seniors on the school bus about how farm subsidies were wrong.

Ron hopes you will find his blog posts and book insightful on God’s Word, the government our founding fathers blessed us with and what America needs to do to be blessed with repentance and revival.